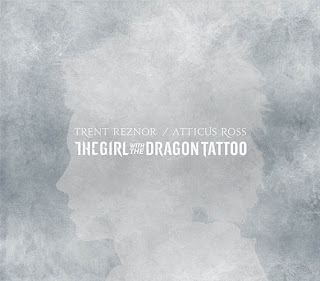 Written, produced, and performed by Trent Reznor and Atticus Ross, the soundtrack to David Fincher’s 2011 adaptation of The Girl with the Dragon Tattoo is a three-disc album of score music that features two cover songs performed by the duo with contributions from Yeah Yeah Yeahs vocalist Karen O and Mariqueen Maandig of the Reznor/Ross outfit How to Destroy Angels. While the music is similar to the dark-ambient yet melodic-piano pieces of their previous soundtrack work in The Social Network. The result is another outstanding score/soundtrack album from the duo of Trent Reznor & Atticus Ross.

Opening the album is an intense yet frenetic cover of Led Zeppelin’s Immigrant Song that features pulsating yet hammering beats, chainsaw-driving guitars, buzzing keyboards, and wailing vocals from Karen O. The song is a very industrial take on the Led Zeppelin classic as Karen O, Trent Reznor, and Atticus Ross maintain the same intensity and spirit of Zeppelin in their own take of the song. The next thirty-seven tracks of the album are instrumental score pieces that totals to nearly three hours of music with varying degree of moods and textures for the film.

The large bulk of the album is based on dark ambient pieces like She Reminds Me of You, People Lie All The Time, Perihelion, Hidden in Snow, How Brittle the Bones, Please Take Your Hand Away, Cut Into Pieces, Under the Midnight Sun, Aphelion, The Same As The Others, A Pause for Reflection, While Waiting, The Seconds Drag, Later into the Night, Millennia, We Could Wait Forever, Great Bird of Prey, A Pair of Doves, The Sound of Forgetting, and Of Secrets. They’re essentially down-tempo material that ranges from being very melodic and quiet with a sinister edge to them as it features the Swarmatron buzzing machine. While tempos vary a bit throughout these cuts that add to the dramatic moments of the film as well as low-key suspenseful moments that involves Lisbeth Salander and Mikael Blomkvist. A lot of the music is driven by a mixture of the Swarmatron, piano melodies, marimbas, and keyboards to help set the mood.

On the industrial/electronic side, there’s With the Flies, A Thousand Details, A Viable Construct, Oraculum, Another Way of Caring, and Infiltrator. A lot of these materials either range into intense and heavy in terms of production and performance or, in the case of a cut like Oraculum, is very stripped-down to maintain some suspenseful moment or something that is far more mechanical in its performance. These cuts just amp up the tone of the film as they are some of the best material in the film.

More up-tempo cuts like Pinned and Mounted, An Itch, and You’re Here have a more hypnotic feel either with its rhythm or melodies to either introduce characters or to help heighten the drama while the marimba-driven The Heretics help intensify things with a bit of electronics into the performance. Somber pieces like What If We Could?, One Particular Moment, I Can’t Take It Anymore, The Splinter, Parallel Timeline with Alternate Outcome, and Revealed in the Thaw, and Hypnomania are tracks that are all driven by the piano while containing some eerie textures to either heighten up the drama and suspense while a lot of it is very low-key and plays to the more intimate moments of the film as well as more brooding aspects of it.

Closing the album is a cover of Bryan Ferry’s Is Your Love Strong Enough? by How to Destroy Angels as it’s sung by Mariqueen Maandig as it starts off as this calm, ambient-inspired cut as Maandig sings Ferry’s heart-wrenching lyrics. The song then slowly intensifies with its warbles of keyboard melodies and mid-tempo beats while Trent Reznor sings back-up to Maandig’s more soothing vocals.

While the album has a lot of amazing material plus two brilliant cover songs, the big flaw about the album is its near-three hour length. There’s a lot of instrumental material that weaves and moves through different moods and textures along with different musical styles. For a score piece, it’s quite phenomenal though it’s not as accessible as Reznor and Ross’ previous score work with The Social Network.

Related: The Girl with the Dragon Tattoo (2011 film)